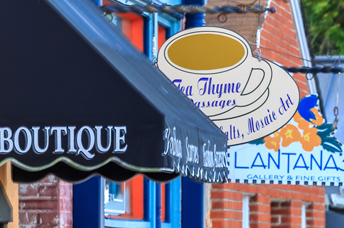 Life In a Seatown

Originally incorporated in 1792, Smithville was named after Benjamin Smith, a Continental Army colonel who later became governor of North Carolina. In 1887, Smithville was renamed Southport to promote efforts to become a major southern port for steamships and railroads. It has been a fishing village and military town since it was established and more recently known as a “movie town.”

The historic charm of Southport will captivate you as you walk under a canopy of live oak trees more than 200 years old. Take a stroll through the town and enjoy the historical heritage.

Just four miles from our main entrance, downtown Southport is alive and bustling with the small town feel that just makes you feel, well, at home. Antiques and collectible shops, great restaurants and fabulous boutiques fill the storefronts.

Even better? Stroll under the 200-year-old live oak trees and past historic Victorian homes that once housed river pilots and maybe a pirate (or two!) and now act as the backdrop for many a TV show or movie. Oh, if walls could talk!

Click on the bag to learn more about southport

Just Around the Corner

Local seafood, fine dining, and ethnic flavor all just around the corner.

Please enter your username or email address. You will receive a link to create a new password via email.